Recently, my family and I had breakfast at a large breakfast chain restaurant on Cape Cod. While we ate, I noticed the staff shuffling tables around from beneath air diffusers which appeared soaked and were dripping water. After breakfast, I discussed the situation with the manager (yes, I am an HVAC geek) who thought he had a leaking pipe on his hands. More than likely, I concluded, it was an HVAC problem resulting from an overzealous attempt at energy conservation. 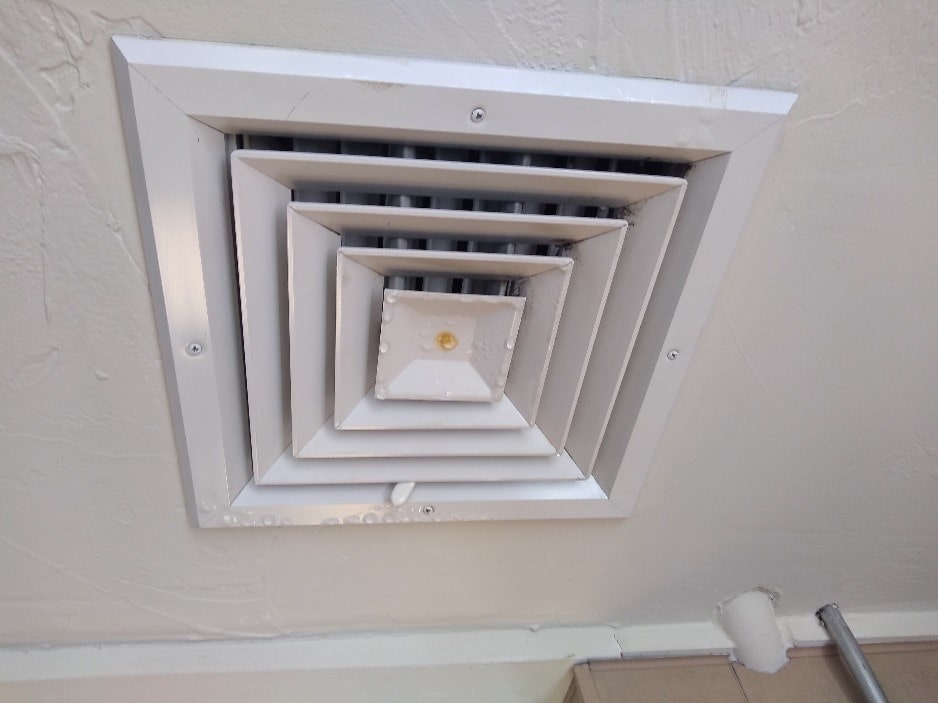 Drenched Air DiffuserThe manager indicated that recently, to save energy, they chose to shut off the air handlers when the restaurant closed each day. When the kitchen crew arrives early (before the restaurant opens), they turn on the exhaust fans as they begin prep-cooking. Without the air diffusers running, the cooking moisture mixes with the warm, moist outdoor air coming in through the exhaust fans (through common air leakage). Then when the dining room staff arrives shortly before the restaurant opens for customers, they would turn on the air handler.

At this point, the return air from the restaurant space is very warm and humid. For the next few hours, the air handler cooling coil is saturated (it is removing as much moisture as possible). It is being presented with warm, moist air from both return air from the space as well as the fresh outdoor air. As the coil is saturated, the liquid moisture tends to travel down the ductwork and condense on points of restriction (air diffusers).

So, what’s a little water? Why should we be concerned? Obviously, we don’t want water dripping on people, even if it is clean. Also, this dripping water can stain walls, ceilings, and floors. The picture above shows the corrosion beginning on the diffuser. Finally, moisture in the ductwork can eventually result in mold and mildew, which can cause illness to occupants who are sensitive to these growths.

In a situation where we want to conserve energy in the cooling season, we typically recommend temperature setback (up) during unoccupied periods. Similar to heating systems where you might turn the thermostat down to 55°F during the day when we are away at work or at night when we are asleep, with AC systems we recommend the space temperature setpoint is raised to 80-85 when spaces are scheduled to be unoccupied. This is not always obvious to the user. We limit the lower end of the temperature in heating to keep the pipes from freezing (with some margin of error just in case), but, with cooling, many feel it can be just shut down (often by just throwing the breaker).

By leaving the AC system running and turning up the temperature setpoint, the circulation fan will typically continue to operate, and the cooling will still periodically cycle to provide some limited cooling (and dehumidification). Often, these units will have sophisticated controls which might include a dehumidification sequence that can be switched on or scheduled to operate during specific periods.

Sometimes the simple answer isn’t the best. With modern equipment and new complicated algorithms operating them, it makes more sense to lean into the complexities and let these systems work for you. Don’t worry; we stay on top of all the latest technology and trends, so you don’t have to. Our engineers and specialists are here to help you make cost-efficient, energy-efficient decisions. Contact us today!