A Matter of Vocabulary

There are a variety of power distribution terms to describe different pieces of the electrical infrastructure that we all encounter throughout our lives. To ensure understanding in future blog posts, I’ll lay out some of the equipment and how to recognize it.

At their core, the equipment described below serves the same function of distributing power to individual loads and protecting conductors from damage due to short circuits and overloads, while isolating live components from environmental factors and preventing human contact with energized parts.

The piece of equipment that we are most familiar with is the humble loadcenter. It serves most of our residences and is usually in an inconspicuous corner of a garage or basement. Loadcenters are typically 14” wide, corresponding with a common width between studs in residential construction, and mounted either flush with drywall or surface-mounted. They are available at retail stores or from an electrical wholesaler’s stock. Though they aren’t customizable, there are cataloged accessories for unique situations, such as interlocking a generator breaker with main breakers. Typical current ratings range from 70 amps to 400 amps, and most panels utilize single-phase construction.

In a typical office or light commercial space, it is more likely that you would encounter a panelboard. More specifically, you’ll find a lighting and appliance panelboard. Panelboards are typically three-phase construction, differ slightly from loadcenters in standard breaker quantities, and typically take advantage of breakers that are secured to buswork using bolts rather than simply plugging on. These are 20” wide as standard, though they are available in increased widths for circumstances that demand it. There is also a larger number of factory modifications and accessories available, including the addition of power metering, directory holders, and larger breakers. Panelboards are also available at higher voltages, up to 600, and current ratings up to 600A. Though they are typically factory assembled in two to three weeks, simple configurations are readily available from electrical wholesalers.

In a small industrial facility or a large office building, you’ll also see a power distribution panel. These panelboards can be very large, with up to 1200 amp busses and the same 600 volt maximum as lighting panels. Their purpose is to distribute power to downstream lighting and appliance panels and large motor loads, like for HVAC systems. They have a similar number of modifications as lighting and appliance panels. These can be wall-mounted in smaller configurations, but it is not atypical to see them mounted on a housekeeping pad, still secured against a wall. 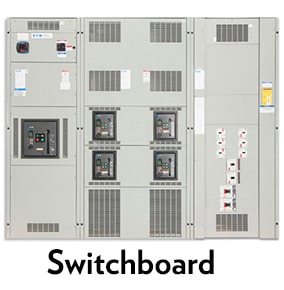 Switchboards are the next step up and can look very different, consisting of one or more free-standing sections. You can mount circuit breakers in groups, as in all the equipment discussed thus far, or with just one or two breakers in a section. They are available in numerous configurations, including multiple main breakers, complex power metering, and directly connected to large transformers to form a single assembly. These are custom arrangements that typically take several weeks to assemble.

Motor Control Centers differ from the other equipment described so far in that they allow more sophisticated control of individual loads rather than strictly protection of circuits. They are free-standing structures that look superficially like switchboards but are very different under the hood. Most loads are motors, and the control for each motor consists of an element such as a motor starter or variable frequency drives. Most of these control elements are contained in segregated, easily-removable enclosures called buckets, while very large controllers are bolted in place and connected to the bus. The buckets also incorporate pushbuttons, indicating lights, and other devices so that plant personnel can monitor and control the loads. 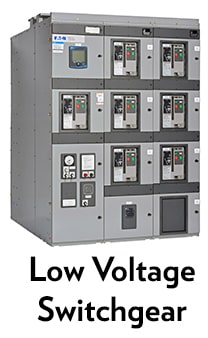 The last step, and the largest equipment I expect to address, is low voltage switchgear. Low voltage switchgear is a rugged assembly of multiple sections with circuit breakers mounted in cradles that allow for removal and service without de-energizing the whole assembly. They are used in applications demanding the highest levels of reliability and serviceability, such as hospitals, data centers, and heavy industry. Their lead times are even longer than switchboards, potentially up to several months.

We’ve Got More Than Definitions

We understand power distribution and electrical infrastructure. Our Specialists can not only help you understand what you need, but they can also design the right solution. Contact us today!

All equipment images are © Eaton