If you are new to networking, it is easy to become overwhelmed by the seemingly endless acronyms and jargon that surrounds you. Do not worry, in time and with enough practice, you will learn to talk the talk and walk the walk. Today I would like to focus on the basic concept of a subnet to give you a better understanding of networking.

A subnet or subnetwork is a logic-driven subdivision of an IP network. When you divide a network into two or more networks, it’s called subnetting.

First, let’s look at IP addresses, the 32-bit unique identifier for a device on a network. People are used to seeing something like 192.168.0.10 and then that 255.255.255.0 in the box underneath. That 255.255.255.0 is the subnet mask. This value defines the network that the corresponding IP address is a part of by breaking down the octets into host and network bits. Sometimes you may see that subnet mask value displayed in CIDR block notation. That would look something like 192.168.0.10/24 for the example above.

To understand what this means, we need to start by breaking down the numbers above into their bits and octets.

Now that we have our bits for both our IP address and our subnet mask, we can determine four very important things about our network:

You do this manually by using a process called bitwise, but for the purpose of this we will use a subnet calculator: 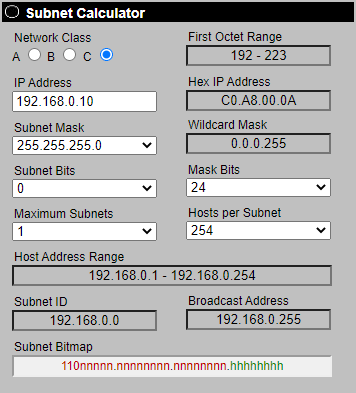 With this tool we can see that:

Let’s take a look at one more example that has a less widely used IP scheme: