With so many combinations of capital letters out there, networking manuals can look more like alphabet soup than instructions. The following list is not comprehensive, but it does cover the network acronyms you’re likely to see as you build your industrial network. 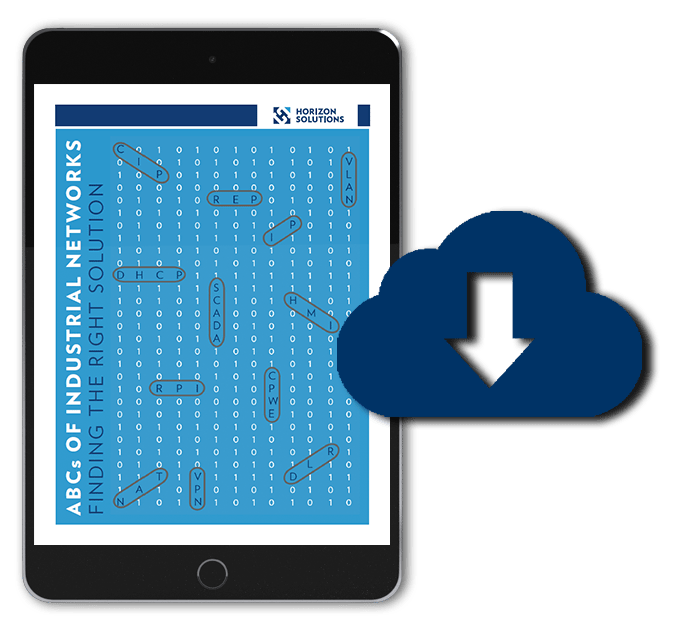 CVD (Cisco Validated Design) – A foundation for system design based on common use cases or engineering system priorities, incorporating a broad set of technologies, features, and applications.

DCS (Distributed Control System) – A computerized control system for a process or plant in which autonomous controllers are distributed throughout without a central operator supervisory control. DCS increases reliability while reducing installation costs.

DH+ (Digital Highway Plus) – A local area network designed to support remote programming and messaging between computers and controllers for factory-floor applications.

DHCP (Dynamic Host Configuration Protocol) – A network management protocol for Internet protocol (IP) networks. A DHCP server dynamically assigns an IP address and other configuration parameters to devices on the network, allowing them to communicate with other IP networks.

DiD (Defense in Depth) – An information security concept which consists of multiple security control layers (defense) placed throughout an IT system. The goal is to provide redundancy.

DLR (Device Level Ring) – A type of ring topology. DLR allows automation devices to be placed in a ring with a convergence time of fewer than three milliseconds, eliminating lag time.

DMZ (Demilitarized Zone) – An additional security layer, a DMZ is a physical or logical subnetwork containing and exposing a company’s external-facing services to an untrusted network (e.g., the Internet).

DTLS (Datagram Transport Layer Security) – A communications protocol that prevents eavesdropping, tampering, or message forgery. This security measure is based on TLS protocol (see below) and is intended to provide similar guarantees.

IIoT (Industrial Internet of Things) – Interconnected instruments, sensors, and other networked devices,
allowing data collection, exchange, and analysis. IIoT has the potential to facilitate improvements to productivity and efficiency.

LAN (Local Area Network) – A computer network in a limited area, interconnecting computers within a residence, facility, or organization.

LLC (Logical Link Control) – A communication protocol layer that is the upper sublayer of the data link layer of the OSI model (see below), interfacing between the MAC (see below) and network layers.

MAC (Medium Access Control) – A sublayer that controls the hardware responsible for interaction with the optical, wired, or wireless transmission medium. The MAC and The LLC make up the data link layer. [Also known as Media Access Control]

PLC (Programmable Logic Controller) – Ruggedized and adapted for manufacturing process control, PLCs are industrial digital computers. They can be designed in many arrangements, including digital and analog I/O (input/output).

PRP (Parallel Redundancy Protocol) – Proving seamless failover against failure, PRP is a network protocol standard for Ethernet. The redundancy provided is invisible to the application, and PRP can be implemented entirely in software.

RPI (Requested Packet Interval) – The RPI is the period at which data updates over a connection. It is generally measured in milliseconds.

SCADA (Supervisory Control and Data Acquisition) – A control system architecture for process management and operation. SCADA is a hardware and software system that allows users to control processes, gather data, interact with devices, and more.

TCP (Transmission Control Protocol) – One of the main protocols of the Internet protocol suite, TCP provides ordered, reliable, and error-checked delivery of a stream of bytes between applications. [Also known as TCP/IP]

VLAN (Virtual Local Area Network) – A LAN is a local area network. The virtual component allows a group of Ethernet devices (subnet) to be physically separated by many Ethernet switches but communicate as if they were connected to the same physical Ethernet switch.

VPN (Virtual Private Network) – An Internet encrypted connection from a device to a network, ensuring that sensitive data is safely transmitted. A VPN can prevent unauthorized eavesdropping while allowing the user to conduct work remotely.

WAN (Wide Area Network) – A WAN is a larger network with Internet access and connections to numerous LAN’s. An example of a WAN would be the network provided to you by your Internet Service Provider or ISP.

What these industrial network acronyms mean is less important than what they can do for your facility. We’ve identified and written articles about some of the more important acronyms and concepts for networking in manufacturing and industrial settings—and we’ve compiled them into an eBook. Get your free copy today!