You may have heard of Moore’s Law, which states that processor speeds or overall processing power for computers will double every two years. This law not only applies to commercial CPUs but also industrial CPUs. Last year Rockwell Automation® introduced their line of high-performance processors in both the ControlLogix® and CompactLogix™ families. The initial market focus was for high-performance motion applications, but the increased CPU performance has also been advantageous in discrete manufacturing and process applications.

Let’s delve into reasons to consider upgrading your industrial processors. 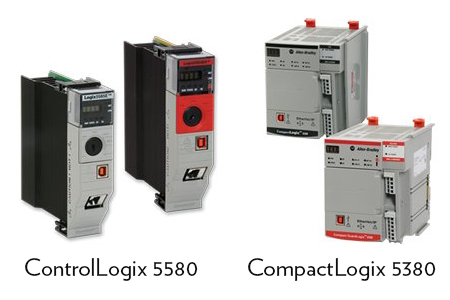 Under the hood of the ControlLogix 5580 and CompactLogix 5380 CPUs resides a quad-core CPU. Each core has a dedicated task. Program logic is dedicated to one core, communications another, and I/O the third core. As of this blog, the fourth core is idle.

Program scans have improved by up to thirty times that of the previous Logix controllers. The motion course update rate in previous controllers was limited to about 1ms per axis, with the high-performance CPUs we can now configure thirty-two coordinated axes to update at 1ms.

In previous controllers, the communications were serviced either as an interrupt in the continuous task or at the end of periodic tasks if no continuous task was configured, which had the potential of communication bottlenecks. Those experiencing that typically increased the communication overhead time slice to allow for communications to be serviced with a byproduct of increased scan times. With a dedicated CPU for communications, the overhead time slice is a thing of the past. Communications are now asynchronous to program scan. With the previous controllers, it was highly recommended not to exceed 80% loading of the logic memory to allocate for tags on scan with HMIs and online edits. High-performance controllers do not have that limitation, allowing 100% of the logic memory utilized for code, which may allow you to downsize the controller memory and price point.

In the 5570 ControlLogix family (L5x, L6x, and L7x), there was a dedicated CPU for I/O, but the 5370 CompactLogix family did not have a dedicated CPU. To service the I/O, there is an interrupt that interrupted the logic scan, so it was not truly asynchronous, especially if there were task priorities less than six, which is what the I/O was at. Now, both 5580 ControlLogix and 5380 CompactLogix have a dedicated CPU for I/O. And with the new 5069, I/O has sub-millisecond screw-to-screw throughput.

The new high-performance controllers also incorporate an embedded Gb Ethernet port on the processor. One limiting factor in an Ethernet/IP network is the bandwidth (Packets per Second or PPS), which correlates directly to the I/O requested packet interval (RPI). Rockwell Automation has Ethernet capacity tools available to size a system. And in 5370 and 5570 controllers, it was prudent to ensure the capacity of the Ethernet/IP scanner wasn’t overtaxed. The calculation for PPS is 2x Connections / RPI. Typical PPS limitations of the scanner were on the order of 5000 to 20,000 PPS with a 20% buffer for class three communications. The new high-performance controllers increased the PPS to 128,000. So, it’s rarely a consideration.

Sizing a high-performance control system is based on a few criteria. The processors are sized by Ethernet/IP node count and memory and with CompactLogix, local I/O count, and motion capabilities. Every Ethernet/IP device configured in the I/O tree counts as a node, adding a second Ethernet card does not increase the node count. Devices like HMI programming terminals and devices that use class three messages are not considered nodes. Memory is the next criteria. These controllers can be sized to utilize 100% of their memory. If you’re using CIP motion for the CompactLogix 5380, then you must consider the number of axes.

We Can Help Your Improve Performance

Are you considering upgrading your processors? We can help. Our expert Automation Specialists are well-versed in the latest innovations and the advantages of each. They’re here to work with you, assess your unique situation, and design a custom solution. Contact us today!