Streamlining Manufacturing for Over 50 Years

In the manufacturing world, everyone wants to optimize their production line to produce more while increasing quality. To achieve these goals, manufacturers have been installing robots over the last 50 years allowing them to increase throughput and improve the overall product quality. Though robots withstand wear and tear well, there will be times when manufacturing facilities require automation equipment repair.

Robots perform many functions. They pick and place, cut, weld, paint, assemble, pack and label, palletize, inspect the product, and test. And it’s all accomplished with high endurance, speed, and precision. 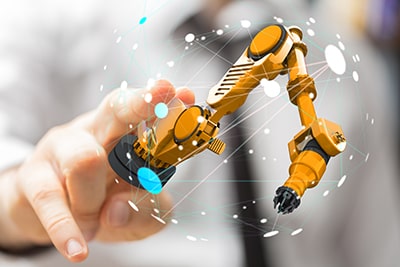 When talking about robots, you need to understand how many degrees of freedom (or axis of motion) they have. I will take a quick pause and explain degrees of freedom. A degree of freedom is any joint that creates a motion. A part of the robot will move either up or down (pitch), move left or right (yaw), and rotate or spin (roll). Think about the way your arm moves from your shoulder down to your wrist. The shoulder, the elbow, the wrist all act as a degree of freedom. Your fingers act as the end of arm tooling.

Six major items can fail or be damaged on a robot, requiring automation equipment repair or part replacement. These items are servo motors, servo drives, the teach pendant, power supply, LCD display, and the industrial computer.

Let’s take a quick look at a robot that has four degrees of freedom. For each degree of freedom on a robot, there is a servo motor and drive. So, for a robot that has four degrees of freedom, that equals four servo motors, four servo drives, a teach pendant, power supply, display to show what step it is in its program, and an industrial computer to tell the robot how to move. If you add all those components together, this one robot has 12 different points that could fail at any given time and render your robot out of commission and in need of automation equipment repair. Now we have identified the critical spares that you should be thinking about for support.

Are you one of the many manufacturers that have robots on the production floor performing a critical task? What happens when you have a component fail on one of these machines and production comes to a grinding halt? How do you get the needed support to get the robot back up, running, and producing again with the least amount of downtime? Do you have the right spare parts, and do you know that when you pull one off the storeroom shelf, it will work the first time you install it?

Rockwell Automation® is now a preferred supplier to support your FANUC robot components and other brands of robots. They have over 50 fully functional robots in their repair facility in Michigan, so they can functionally test repaired components. And they can test multiple types, including FANUC, ABB, Yaskawa Motoman, KEBA, and KUKA robots.

We Can Help with Parts and Repair

Rockwell Automation can support over 20,000 components, and we’re an Authorized Distributor. When you have a component that fails, we can send you an exchange part that has been fully functionally tested or refurbish your part and return it tested. Additionally, we can do wrist repairs for KEBA and KUKA robots. There are many options we can discuss with you to support your critical production items.

If you would like to have a conversation regarding your support for your robots and components, please reach out to your Horizon Solutions Asset Management Specialists.