There’s a fit for everyone

In today’s world, automation isn’t about eliminating jobs—it’s about increasing productivity and reliability. Businesses of all sizes are under pressure from consumers to produce the best product at the best price. In many cases, the way to do that is to automate. Automation isn’t one thing, and it does not have to encompass everything within your company or be a big, disruptive project.

Automation benefits are multifaceted, and it’s ok to start small and grow into automation. 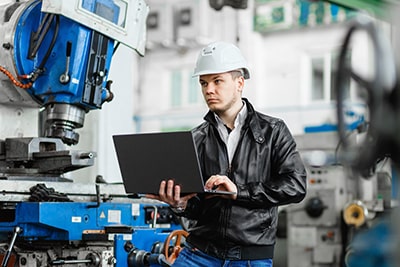 In some cases, there are several steps in a process to get the desired results. Streamlining that process through automation can reduce the overall cost and increase profits. Let’s look at an example. Say five people performing five actions make 200 widgets by the end of the day. The cost to produce each widget is $100 (including labor, material, and overhead), and they retail for $110. At week’s end, you have made $10,000, which adds up to $520,000 at the end of a year. Not bad, right?

Now, let’s look at the impact automation can have on that process. By automating parts of the process, you now have two people producing 220 widgets each day, increasing productivity while reducing overall labor costs. And, now that you go through more material, you can buy more at a 5% discount, lowering costs even more. The same product now costs you $93 to make. Maintaining the same resell price would make you $18,700 in profit per week and $972,400 a year. That’s an 87% increase in annual profits!

When it comes to streamlining processes, don’t assume that has to mean reducing labor or dramatically increasing margins—though those are very good reasons to automate and may make the most sense for your business. Automation can also mean freeing up staff to do something else within the company. In the above example, three people can now perform other tasks. And you can always pass the savings onto the consumer, allowing your company to increase market share and customer loyalty. Using the example above, maybe you reduce the cost of the widget to $105. Now, you’re edging out the competition while still increasing profits.

No matter the industry, humans are the most important resource, so keeping them safe must be a top priority. In 2017, OSHA reported 4.1M job-related injuries or illnesses and over 5K deaths—that’s 14 deaths a day. And beyond the physical ramifications of workplace accidents, there is a financial impact, as well. OSHA estimates that employers pay almost $1B a week in direct workers’ compensation costs.

Automation is a way to address safety concerns and keep workers safe. From sensors to light curtains to alarms, automation can protect workers from broken bones, crushed appendages, chemical exposure, and even death. Returning to the example above where five people are producing widgets, what does an injury do to your productivity and profitability? If just one worker is out for six weeks recovering from a broken finger (a minor incident when you consider the possibilities), you could lose $48,000 in profits, and that’s to say nothing of the cost of addressing the injury.

When it comes to safety, can you afford not to automate?

The fact is, no one person can maintain consistent quality hour after hour, day after day. We’ve known this since the Industrial Revolution with the introduction of interchangeable parts. The issue there was slightly different, but the introduction and adoption of the concept lowered production costs and made repairs easier. So, lower costs and increased efficiency—the same benefits of automation.

Looking specifically at product quality, automation helps businesses produce their parts and products at a consistent quality level. Machines are better than people at performing repetitious movements (e.g., humans are more susceptible to injury and fatigue). Shifting repetitious tasks to machines frees workers to confirm quality, make adjustments, and ensure consistency. Returning to our example, if customers return just .05% of the widgets for a full refund due to quality issues, that will reduce profitability by nearly 6%.

When I talk to my manufacturing and industrial customers, I’m hearing that it can be a challenge to find workers to fill open positions. High turnover is also a concern, especially for lower-skilled, lower-paying positions. For these roles, employers may be competing with McDonald’s. If you’re budgeted to pay $14.50 an hour for a lower-skilled job, workers may find a $15.00 fast-food job more appealing.

Automation can replace these hard-to-fill roles, allowing your company to remain consistently productive and reduce attrition. An automated machine or process doesn’t leave for $.50 more an hour. And happy workers who aren’t overworked don’t come in late, sneak out early, or take unscheduled time off.

We Can Help You Automate

You don’t have to be a large company to benefit from or afford automation. In most cases, automation pays for itself when done right. For example, we support the Micro800 family of controls that can help you start your automation journey. These products are reliable, robust, and cost-effective. And that’s just one example of how you can start experiencing automation benefits. Our Automation Specialists can design a custom, affordable solution that will help you realize ROI. Contact us today.